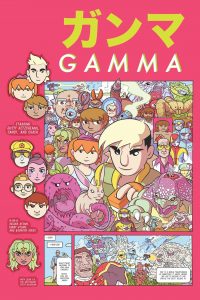 Gamma begins in the early seventies in the Philippines, a few years since the Great Sentai War, a world war that ravaged cities across the planet, but established a new world order. The new world is run by The Guardian Force, a military organization that uses super-powered super suit wearing teenagers to patrol the planet and protect it from a plague of monsters. Dusty, Sandy, and Crash are orphans living in the post-war Philippines, kids left behind by parents who could not feed them. The three hustle every day to catch monsters, trading them or selling them, or eating them.

Dive into a bizarre, yet somewhat familiar world where kids in Power Rangers type suits are the foot soldiers of a World Government, people have become used to living alongside Aliens, Robots, and Giant Monsters, and a young monster trainer can’t stop making things worse. But making things worse is the only way to make things better.

Gamma #1 (of four) goes on sale September 26, 2018, and is available for pre-order at your local comic shop. Gamma is co-written by Ulises Farinas and Erick Freitas with Farinas providing interior and cover art with Melody Often on colors.