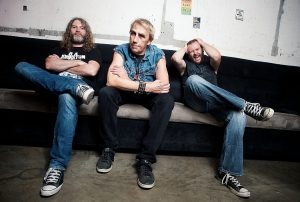 D.O.A. announce new music video and US tour dates
“Not Gonna Take Your Crap No More” is a rally for living wages and corporate fairness on pay.
US dates starting Friday May 13th in Bellingham, WA
Canada’s legendary punk pioneers are headed back to the US with a new music video and a new mission. This time Joe Shithead Keithley, the godfather of hardcore, is rallying for living wages and corporate fairness on pay via the new music video from D.O.A.‘s latest album, Hard Rain Falling (their 16th studio album).
When Keithley set out to write the songs for the album, he used D.O.A.’s early efforts like Hardcore 81, Something Better Change and War on 45 as a bit of template, in the sense that the songs should be quick, short, and right to the point. His songwriting takes on a wide range of modern and horrible screw ups, ranging from racism, to street gangs, to war, and environmental degradation.
“Not Gonna Take Your Crap No More” is just the tip of the protest iceberg for Hard Rain Falling. “The Cops Shot a Kid” takes on the tension in America over police shootings of unarmed men, and “Warmonger” is a commentary on the scourge of war and the ever increasing blind acceptance of war as a matter of business, money, and convenience by big media, big business and big government.
D.O.A., long known for their pro environmental stance, also take a wide swing at the oil industry with “Pipeline Fever,” a track that features Keithley doing his best Johnny Rotten, “We mean it, man!” In a rather pointed manner, the band hits all the key notes on “Racism Sucks” then brings Hard Rain Falling’s self evident commentary on the state of the world full circle, by closing it out with a revved up version of Johnny Cash’s “San Quinten.”
Now, the “Men Of Action” are returning to the US for some unfinished business.
US TOUR DATES:
Friday May 13th – The Shakedown, Bellingham, WA
Monday May 23rd – The Space, Salem, OR
Tuesday May 24th – The Catalyst, Santa Cruz, CA
Wednesday May 25th – Petie’s Place, Tarzana, CA
Thursday May 26th – The Festival Hall, Santa Ana, CA w/ The Dickies
Friday May 27th – The Casbah, San Diego, CA
Saturday May 28th – Los Globos, Los Angeles, CA w/ Guttermouth
Sunday May 29th – Las Vegas Country Saloon, Las Vegas, NV – Canadian Night w/ Dayglos
Monday May 30th – Club Red, Mesa, AZ
Tuesday May 31st – Gaslamp, Long Beach, CA
Thursday June 2nd – Summit Music Hall, Denver, CO w/ The Buzzcocks
Saturday June 4th – Emerald of Siam, Richland, WA
Joe Keithley is on Twitter! Follow Joe and the D.O.A. gang on Twitter @DOAJoe and on Facebook at http://www.facebook.com/DOAPUNK