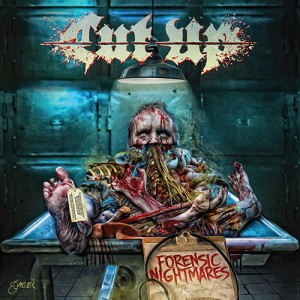 Cut Up – Forensic Nightmares (Metal Blade)
This band must have just graduated from Cannibal Corpse’s school of charm judging by the song titles. Musically it’s different, not in the least having members who paid their death metal dues in several bands for more than two decades. There’s elements of old school Swedish death metal, parts Florida scented death, more than a few grind influences, and those down­tuned Slayer riffs. It’s completely your band if you like both brutal and gore. Songs do tend to go quite deep technically speaking, which might turn off the headbangers looking for a more straight-­up fix. Where bands like Entrails, also on Metal Blade, look towards the 80s for inspiration, it seems that Cut Up have a thick mid­-nineties vibe. Interesting record non­the­less. Martijn Welzen