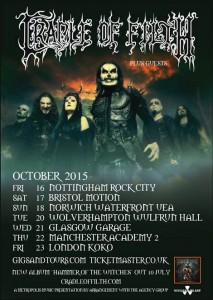 Cradle Of Filth one of the greatest and most influential British metal bands of all time are pleased to announce a run of UK tour dates this October in
celebration of latest endeavour and opus nocturne entitled ‘Hammer Of The Witches’ – out on 10th July.

Fiendish main man and vocalist Dani Filth had to say regarding the announcement;
“CRADLE Of FILTH are extremely pleased to be hitting the European road in support of our latest album, ‘Hammer Of The Witches’, even more so now that British dates have been indelibly grafted onto the beginning!
The band is sounding better than ever and are exhilarated to be starting our world tour here in England, at Rottingham Knock City nonetheless, the proverbial hub of heavy metal!
We have an amazing setlist prepared already and everyone, including our infamous Crewdle Of Filth, are chomping at the bit to get out there and start levelling cities with our unique brand of raucous, Hellish music and stage production.
So, long live the ‘Filth and see you out there on the open field of battle!
Wielding the Witch hammers,
Your fiend, Dani”

‘Hammer Of The Witches’ stands out as a milestone in Cradle’s lengthy history. It continues their grand tradition of infusing every album with a unique atmosphere and conceptual elements that embolden the songs’ dramatic execution. It is classic Cradle from start to finish. And with typically mischievous aplomb, the album’s title gleefully flips the historical script, turning the tables on the gruesome witch hunts of 16th and 17th century Europe and exacting some hard-earned vengeance on behalf of all of those who suffered persecution at the hands of religious zealots during that turbulent period in history.
Having been three years since the release of their previous album, this has been the longest gap in the band’s murky history. And the wait is nearing completion.

Cradle Of Filth have cast a commanding and macabre shadow across the metal scene for nearly a quarter of a century. Armed with their trademark, cross-pollinated assault, that taps into myriad strands of sonic extremity and morbid opulence, they have steadily conquered the entire world, unleashing a malevolent slew of classic albums along the way. From the raw and rambunctious savagery of their 1994 debut ‘The Principle Of Evil Made Flesh‘ to the wickedly monstrous, technicolour bombast of 2012’s ‘The Manticore & Other Horrors‘, the Cradle ethos and aesthetic has had a huge impact on the evolution of metal, the band’s insatiable appetite for performing live and frontman Dani Filth’s unerring charisma and sense of occasion ensuring that they have established a powerful and enduring connection with Hell-bound acolytes everywhere.