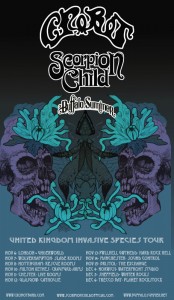 Fresh from their packed out performance at Download Festival Crobot have announced they will return to the UK to headline a lengthy Tour this November.

The funky groove rockers have toured twice on these shores since releasing their Nuclear Blast debut ‘Something Supernatural’ last Autumn, both supporting The Virginmarys last year and Black Label Society earlier this year.
As well as these headline shows, Crobot will also be playing Hard Rock Hell Festival and Planet Rockstock in Wales and Sheffield’s Winter Rocks.