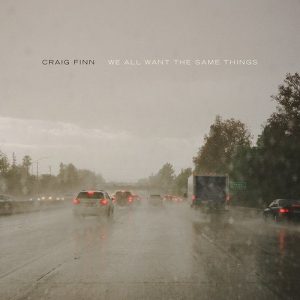 While I’m sure that the majority of the free-thinking, astute and discerning folks in the world undoubtedly share the same well-earned and deserved high opinion of Craig Finn’s band, The Hold Steady, as I do, I’m not sure that they’re as unfamiliar (because being a little long in the tooth, I’m not as switched on or tuned in as the hip and happening cats who crowd clubs and music scenes the world over) with his solo work as I am. Even though We All Want the Same Things is Finn’s third solo record, it’s the first that I’ve actually heard and I’ve fallen in love with every second of it.  With each repeated play, I’ve felt my blackened, wizened and withered soul become a little lighter and begin to unburden itself as Finn travels through the wasteland that exists between Elvis Costello Junction, Tom Waits County and Bruce Springsteen Land delivering his profoundly enticing Americana fuelled tales. This is the sort of music that you load into the stereo for those long, lonely night drives where only you and your thoughts exist. And We All Want the Sae Things is the soundtrack designed to ensure that even the most abstract of your intellectual wanderings are allowed to roam freely and without care. It’s the stuff that dreams are made of… Tim Cundle