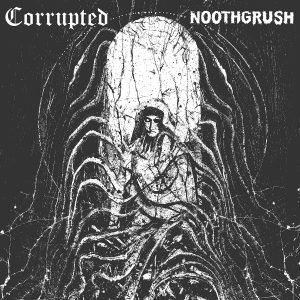 It’s hard to believe this beast of a record is 20 years old! 2 decades since it was first unleashed via Reservoir records, 20 Buck Spin have given the Corrupted/ Noothgrush split a new lease of life. 20 years ago there was a whole wave of extreme bands pumping out releases on the likes of Reservoir or Slap A Ham records. Oddly enough they chose to play extremely fast or extremely slow without any middle ground, the common factor being the desire to push in that direction to the max. So you had bands like Corrupted, pounding out their tortured riffs at a snail’s pace, releasing split records with lightning fast bands such as Phobia or Discordance Axis whilst fellow sludge merchants Noothgrush shared vinyl with the likes of powerviolence merchants Black Army Jacket. The fact that this album contains only three songs tells you that these bands are at the bottom end of the spectrum. Like wading through thick mud, there is nothing pretty or flighty about what Corrupted or Noothgrush have to offer. If you take Black Sabbath as the starting point but slow that right down and add the nihilism of Eyehategod then you are starting to approach the sounds on this album. Slow, deep and miserable just about sums this record up – a bleak soundtrack that works just as well now as it did twenty years ago. Tom Chapman