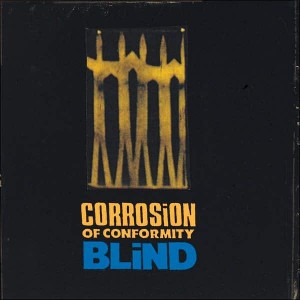 Corrosion Of Conformity – Blind CD (HNE/Cherry Red Records)
One of the best ever C.O.C. albums gets an expanded re-release. About time! Those that will remember ‘Blind’ on it’s original release should reminisce with the powerful mix of crossover the North Carolina band had created, a near faultless balance of aggressive skate punk hardcore which the band had become renowned for, and the musically solid approach of heavyweight metalisms. It was a sound that made impact. Dark song titles and deep lyrical content sees the band striving to push the boundaries also gaining much attention from the metal press and music fans. With ‘Blind’ C.O.C. created a much fuller sound. Heavy guitar work and an outstanding resonance put this album on the lips of many a thrasher, slightly less paced than previous releases, although punishingly hostile and enigmatically showcasing what could be described as the band’s best delivered vocal’s by new frontman Karl Agell. With three bonus tracks from the ‘Vote With A Bullet’ E.P. included along side the original thirteen it’s a welcomed return down an old road. Once again HNE have given us a great booklet of nostalgic photos and press pieces, along with liner notes from (drummer) Reed Mullin and Agell. Mark Freebase