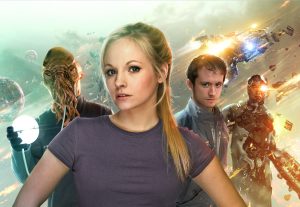 Coming soon from the Worlds of Doctor Who – Jenny: the Doctor’s Daughter!

The Doctor’s daughter is back, and the universe better be ready for her!

“I’m so thrilled to be joining forces with Big Finish to bring Jenny back,” Georgia tells us, “As we head into the 21st century, FINALLY a female Time Lord in charge of her own spaceship… oh wait!”

“Having worked with Georgia before at Big Finish,” says producer David Richardson, “I was very keen to make this series happen – and how brilliant to be able to bring Jenny into her own audio adventure series. I’m very proud of the female role models we have in our catalogue – River Song, Bernice Summerfield, Sarah Jane Smith, Charlotte Pollard among them – and in Jenny we have another brave, bold, intelligent woman who risks everything to save and protect others.”

The last we saw of Jenny, the fantastic creation of Russell T Davies and Stephen Greenhorn, was her revival after a fatal shooting at the end of Episode 6, Series 3 of Doctor Who, and her setting off to explore the cosmos. These new adventures will find out what exactly she saw, and where she ran off to amongst the stars.

Joining Georgia Tennant will be her own companion, much like the Doctor! Sean Biggerstaff (Harry Potter) plays Noah and follows Jenny in her adventures through time and space.

Georgia, also associate producer of these adventures, has been instrumental in continuing the legacy of the character in the Doctor Who universe. As the wife of David Tennant and daughter of Peter Davison – both former incarnations of the Doctor – the rebellious Time Lord spirit certainly runs in the family!

“I am very excited about discovering the new adventures of Jenny – a rogue element in the universe of Doctor Who,” says executive producer Jason Haigh-Ellery. “There is so much we can do with the character and I’m really glad that Georgia has agreed to not only come back to play the part, but also to participate in moving the series forward.”

Prisoner of the Ood by John Dorney

Matt Fitton, writer and script editor:  “At last, we’re about to find out what happened to Jenny after she flew off in that ship at the end of The Doctor’s Daughter, eager to explore and follow her father’s example out in the wider universe. Genetically a Time Lord, yet born as a soldier, she knows virtually nothing about what’s out there. She’s never even been to Earth!

“So, join Jenny as she finds out who she is, and what happens when she meets a new friend – who’s even more of a newbie than Jenny. It’s been a thrill to put together the series with input from Georgia herself, and work alongside some exciting new writers, as well as the fab John Dorney. With the great Barnaby Edwards directing and a brilliant cast, I can’t wait to get to studio.”

Adrian Poynton, writer: “The only brief I was given for my story ‘Zero Space’ was, ‘Could you do something set on a space station?’. So, without giving away too many spoilers I will tell you the story is set on a space station in the centre of a very rare area of the galaxy called Zero Space. A pocket of the universe containing literally nothing. No gas, no electrons, no light. Nothing at all. What the space station is doing there and who inhabits it… well, you’ll just have to listen and hear what happens when Jenny literally comes crashing through their doors!

When I got asked to write for the Jenny box set I was actually annoyed with myself about how quickly I said yes. You’re supposed to play these things a bit coy and close to the chest but I agreed without even pausing for breath! Firstly, I was desperate to do something with the character of Jenny.  I love having this strong, brilliant young woman whizzing around the place, getting into trouble while at the same time growing up and learning about the universe. In many ways she’s the exact opposite of the Doctor in this. Where the Doctor is old and wise, Jenny is newly created, still learning and making silly mistakes. She’s sort of the ‘Buffy Summers’ of the Doctor Who universe so I was very excited to be asked to explore her further.

The other reason I couldn’t say no was Georgia Moffett. I’d worked with her before on my BBC comedy White Van Man and was desperate to work with her again. She is just a brilliant actor and I love writing for her. In real life she is also one of the funniest people I know and plays comedy so well – I was keen to give her a little bit more of that. Jenny is a bit more giddy about being out in the world and having some adventures now, and this distances her slightly from the angry woman born into war we first met on TV. That part of her personality is still always there, just buried a bit deeper (yet always ready to pop out).

As a writer I’m mostly known for comedy stuff on the BBC so it’s always great when Big Finish ask me to spread my wings and do something different. This is my second adventure for them (my first was the Fourth Doctor adventure: Dethras) and I love how the audio format lets your brain run free and perhaps try a few things that would cost too much or be hard to do on TV (I had a talking monkey in Dethras!!) – I’ve tried to do that again here.

Having read all the scripts for this box set I’m very excited to hear them recorded. It really is the set of adventures fans of The Doctor’s Daughter have been waiting for. And in a world where the 13th Doctor will be saving the universe in female form… it’s so exciting and wonderful to be able to help further the adventures of yet another fresh, strong and unique female character in the Doctor Who universe. As a fan I can’t wait to hear these adventures for myself.”

Christian Brassington, writer: “Jenny’s a great character to write for because she’s so fiery and fun. No-one gets away with suggesting Jenny can’t do anything as well as a boy can!

It’s really good to see another strong female character in our universe. Especially after the fantastically exciting announcement of Jodie Whittaker as the thirteenth Doctor.

Neon Reign is about repressed people and how Jenny deals with injustice. About how a population can become enthralled by a leader just because they seem powerful. It’s a pared-back adventure due to the circumstances Jenny finds herself in. So, in turn, I hope we find out more about Jenny and her intriguing companion as they explore this mysterious world.

I’m really pleased to be working with Big Finish again, especially as a writer. We had a great time on The Silver Turk many moons (and many Doctors!) ago. I hope the fans enjoy this adventure as much. It’s a great series.”