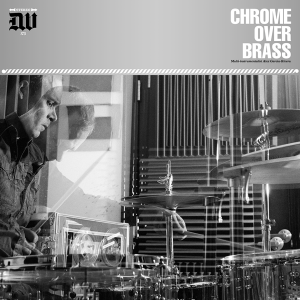 Listen to “Crush on the Derbyshire” now. Release date and pre-ordering information will be announced shortly.

Chrome Over Brass is the one man instrumental band of Alex Garcia-Rivera, drummer of American Nightmare (Give Up The Ghost). As a highly regarded drum technician he has helped meticulously craft memorable drum sounds on landmark releases from Converge, Coliseum, Beastmilk, and more. He has also served as touring drummer for Cold Cave, Saves The Day, Shelter, and many others.

After years of playing in traditional multi-member bands, Alex set out to do something that was 100% of his creation and control. Chrome Over Brass takes the traditional approach to songwriting and flips it upside down. Alex Garcia-Rivera’s thunderous drum-riffs serve as the epicenter of everything rather than typical guitar-riffing/melody. The end result is a proto prog-punk mix that combines a High On Fire toughness with Don Caballero-like proficiency and swagger, all propelled by an urge for late 60s / early 70s inspired artistic exploration.

A true DIY project, the debut album from Chrome Over Brass was recorded in a 100% analog process on 2′ tape at Alex Garcia-Rivera’s own Mystic Valley Studio, a fully analog studio he built with his own hands. Each song is comprised of one complete drum performance on a simple 5 piece drum set (made by Alex himself), with no digital editing. Even guitar and bass tracks were recorded in singular takes; a true rarity in today’s cut and paste music world.

Side-A opener “Elephants Never Forget” stomps out of the gate as a phased out exercise in post-everything heavy. While “Bear Attack”, “Crush On The Derbyshire”, and “Here Come The Stukas” all collectively pick up the pace, introducing technical speed and simple riffing with epic results. Side-B begins with even more impressive musicality in “Black Rainbow” and “Fighting With Tooth And Nailgun”. While synth drenched psychedelic jam “Moogs for Moderns” grants some moments of sonic serenity. That’s not all, “Jeeps On Safari” cleverly emerges from the haze with a hook laden bounce, leading to wild closer “One Night In St. Regis”. A hyper speed percussive blast that needs to be heard to be believed.