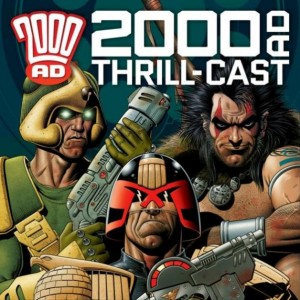 The only official podcast of the Galaxy’s Greatest Comic celebrates its tenth episode with the pair, who visited the 2000 AD Nerve Centre to talk about their love of 2000 AD, bringing Judge Dredd to the radio in the 1990s, any why Johnny’s unlikely to appear in any movies soon!

Johnny, also known as Michael Joseph Pennington, Sr., is an actor and comedian who shot to fan thanks to his TV guest show appearances as well as starring in BBC Three sitcom Ideal, ITV sitcom Benidorm, and on the popular adverts for ITV Digital.

In 1995, Dirk was the producer behind the Judge Dredd radio series that ran on BBC Radio 1 in three-minute bursts; he’s also known for adaptations of Douglas Adams’ The Hitchhiker’s Guide to the Galaxy and Neil Gaiman’s Neverwhere.

We’re also joined by writer Gordon Rennie, who talks about his swords and sorcery epic series Aquila, the latest 2000 AD character being reprinted in a US-format comics series and which has its second issue out next week.

2000 AD’s publicity droid, Molch-R, also runs through forthcoming releases from 2000 AD, plus he delivers the latest listener feedback and recounts one listener’s experience of their first issue of 2000 AD!

The 2000 AD Thrill-Cast is available through iTunes, Podomatic, and Soundcloud