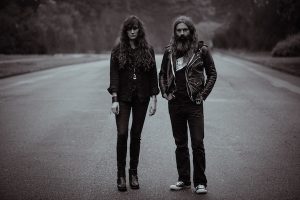 Bay Area metallers, CASTLE have shared premiered a new track titled Down in the Cauldron Bog, taken from their soon-to-be-released album, Welcome To The Graveyard, out on July 12.

Listen to Down in the Cauldron Bog via Terrorizer’s website HERE.
Guitarist/vocalist Mat Davis commented the origins of the track:
“Down in the Cauldron Bog was the first song we wrote for the new album. I got the melody for the song in my head while we were touring in Europe last spring – the idea for the lyrics came from a book I was reading about the Bog People of Northern Europe and the sound seem to come out of the landscape where we were at the time. The song helped set the tone for the rest of the album with its theme of burial and transformation set to a dark rock vibe.”

Comprised of 8 tracks written over the last year, Welcome To The Graveyard sees CASTLE merge their doom powered riffing with soaring 1970s rock. The album features a new level of confident songwriting and is a creepy-crawl through the wastelands of the band’s new L.A. ­­home; a hard-boiled barrage of classic heavy metal riffery tempered with blasts of melodic orchestrated doom. The perfect soundtrack for a Hollywood cult initiation.

Elizabeth Blackwell’s haunted vocal style draws a sigil of death and madness – imagine the Wilson Sisters singing hymns from the stygian void, while lyrically CASTLE adapt the stark and compelling vistas of Aleister Crowley’s Amphora for the song TraitorsRune and Eliphas Levi‘s Transcendental Magic, whose mystic rumination inspires the lyrical backdrop for the lead-off single Flash of the Pentagram, heard below.

Listen to Flash of the Pentagram HERE.

CASTLE was forged in San Francisco in 2009 and released their debut full-length, In Witch Order, on Germany’s Ván Records in 2011. The album brought light to the newly-formed band and earned them “Album Of The Year” honors from Metal Hammer Norway, as well as Roadburn Festival’s “Newcomer Of The Year.” Shortly thereafter, the band joined the Prosthetic Records roster in North America and released their critically-adored sophomore album Blacklands. The record left to a Canadian JUNO nomination for “Metal/Hard Music Album Of The Year.” CASTLE performed over two-hundred shows worldwide in support of the release alongside the likes of The Sword, Intronaut and Pentagram among many others as well as appearances at some of the underground’s largest fests including Roadburn and the London and Berlin Desertfests.

Since the release of Under Siege in 2014, CASTLE, which consists of vocalist/bassist Liz Blackwell, guitarist/vocalist Mat Davis and drummer Al McCartney, has maintained a relentless touring schedule with multiple expeditions throughout the US, Europe and Canada including stops at the 2015 edition of Heavy Days In Doomtown Fest in Copenhagen, Denmark and the Acherontic Arts Fest in Oberhausen, Germany.

The first dates for the upcoming European tour have been announced, with many more to follow.