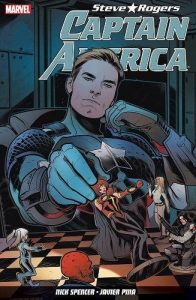 The greatest plots and conspiracies waged against the public and the world at large are the ones that hide, and operate in plain sight. They’re the plans that slowly grind into operation, that have been planned for years and in some cases decades, that are orchestrated by the people no-one would ever suspect of working against the common good.  Which is why the idea that Captain America, Steve Rogers, was recruited by Hydra during his formative years and has been working to manoeuvre that organisation in to a position of supreme power for the duration of his career seems, at first glance, to be ludicrous.  After all, this is Cap we’re talking about, the bastion of the red, white and blue, the epitome of faith in truth and justice and the man who has saved the world more times than he, or anyone else, cares to remember. But it’s true, and that’s why his Secret Empire and the path taken to forge it have remained in the shadows for so long. Because he’s the last person on Earth that anyone would ever suspect of not just being in cahoots with Hydra, but of marching at its head as it finally reaches its goal of global domination. Granted, Steve Rogers journey with the dark side is a fabrication and a product of an alternate reality created by Kobik during the Pleasant Hill saga, but it’s one that he complete believes in and one that his former foes and now allies have come to embrace wholeheartedly as Hydra with their new Captain at their helm at long last looks like it’s going to accomplish everything that it set out to do.

Empire Building is the last rung on the ladder before Hydra and Rogers reveal themselves to the world. It’s an intricately developed and plotted, carefully constructed story in which all of the many tangled arcs and seemingly unconnected tales that surround Rogers and his rise to power are tied together.  Nick Spencer’s Machiavellian fable of the Marvel Universe’s worst case scenario of betrayal is an enticing, engaging and absorbing tale of treachery, deceit and long game strategy that, thanks to a little cosmic nudging, comes to terrible fruition. Death takes centre stage as long standing allies and enemies take their curtain call as Rogers casts his morbid spell, transforming myself and Hydra into something new through personal and political sacrifice. And as the wheels secretly turn, the world at large continues to sleep unaware of the monster that’s about to crawl from underneath its collective bed and feast on the souls, will and freedom of every man, woman and child who walks its surface. Directing his story on to a gorgeous canvas that’s been lovingly painted by some of the comic world’s premiere league talent, Nick Spencer has rigidly adhered to the adage that if a story is worth telling it’s worth telling well, and in Empire Building has laid an incredible foundation for the masterpiece, Secret Empire, that will follow in its wake. Hydra assemble… Tim Cundle