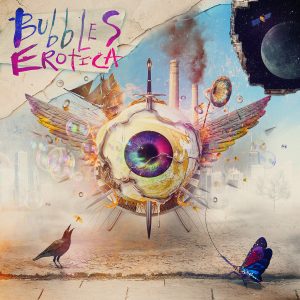 Bubbles Erotica is a quirky rock band that leans to the pop side. What does this mean? It means that their self-titled album is full of catchy, upbeat tunes that are infectious and should probably be in heavy rotation on rock radio. They have everything a fan of rock and roll wants, hooky riffs, catchy lyrics and a sound that’s both unusual and approachable. With song titles like Cicada Arcade and Wisco Disco (perhaps a poke at conservative super-douche Ted Nugent’s Wango Tango) you know you’re in for a treat. This seemingly-goofy band is, however, a serious musical group intent on bringing great songs to the world. While they obviously have a solid sense of fun they also obviously have a solid work ethic when it comes to creating their art. Besides, if they were normal they would just fade into the background rather than shining like they do. Jim Dodge