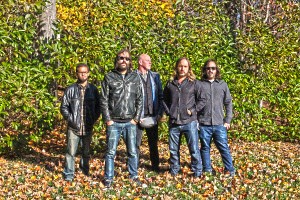 With their third album in four years, KINGS DESTROY leave their hardcore-born stamp on noise rock and doom. After sharing stages with Pentagram, Winter, Saint Vitus, Church of Misery, Yob, Pallbearer, Vista Chino, Orange Goblin, Trouble, Acid King, Corrosion Of Conformity and so many others, the five-piece stand tall with their defining statement.

Championed by Yob guitarist/vocalist Mike Scheidt, who commented: “It’s a great album. Heavy, yes. Doom? Yes, with a dose of the best of the ‘90s. I’m a fan of the ‘90s, so that is meant as a compliment. But what is best about KINGS DESTROY is that they write good songs. Helmet meets early Queens Of The Stone Age meets Kyuss/Unida, roughly. [Steve] Murphy’s vocals are strong and really steps up what is already killer. Great production, tones, performances.”

Adds Pentagram’s Bobby Liebling: “KINGS DESTROY is some heavy shit. I can feel the emotion. I can tell Murphy has got some serious pain; he’s singing from his balls.”

KINGS DESTROY is the name of an infamous graffiti gang from the Bronx circa late ‘70s/early ‘80s. The band members met in this vicinity and were heavily involved in the New York Hardcore scene of the late ‘80s that merged hardcore music, metal, graffiti and hip hop…all distinct forms united in the underground.

Kings Destroy will be released internationally on LP, CD and digitally on May 5th, 2015 via War Crime Recordings. CD preorders are currently available HERE. For vinyl preorders go HERE.