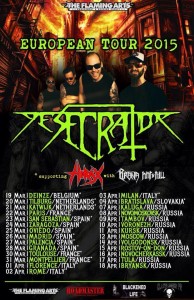 Australian Thrash Masters DESECRATOR have finalized their upcoming tour schedule. The complete list of tour dates, including those for the Thrash Metal Maniacs European Tour with HIRAX and an 11-date Russian tour, are shown below.

DESECRATOR has also been added to Australia’s Steel Assassins Festival to be held in Sydney on November 6-7. Billed as Australia’s only 2-day event dedicated to Trad/Speed/Power/Thrash and Melodic Metal, visit the Fest Facebook page for more information.

DESECRATOR recently released new single “Red Steel Nation,” along with the video that can be viewed at this location. The video was written, produced, and directed by Robert Taylor of Phanterror Video, with cinematography by Taylor and Jeff Hann.

The single follows the band’s critically acclaimed EP Down to Hell. Stream and/or buy Down to Hell, as well as debut album Live til Death and more at desecrator.net/music. Down to Hell is also available in digital format from iTunes, Amazon, Google Play, and Spotify.

Bred on an ideal that music should have power and fed on a hunger to bring back True Thrash Metal with intensity and ferocity,DESECRATOR are one band that you simply must experience. With a sound that has been compared to early TESTAMENT, DEATH ANGEL and SACRED REICH,DESECRATOR‘s twin guitar attack, punishing rhythm section and blood-soaked vocals have won over old guard thrashers and brought along a new generation of fans. Enthusiastic industry response powered DESECRATOR‘s meteoric ascent, while the band slayed audiences on stage in Australia alongside FORBIDDEN, WARBRINGER, MORTAL SIN, HOBB’S ANGEL OF DEATH, MACABRE, HAVOK and TOXIC HOLOCAUST. The band’s first international tour through Southeast Asia served to further cement the band’s reputation as a forced to be reckoned with in the live arena.