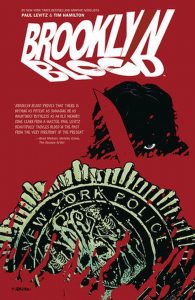 You hear many an old New Yorker talk about how developments over the past 20 years have taken away the spirit of certain parts of The Big Apple, especially in neighbourhoods like Queens and Brooklyn and writer Paul Levitz has alluded to this in the opening of Brooklyn Blood the latest title from the New York Times best-selling graphic novelist and partner in crime, artist Tim Hamilton. Only this book goes way back into the history of New York. To a time before it was New York.

The hipsters have taken over and detective Billy O’Connor, fresh back from military service and with a severe case of PTSD is assigned a serial killer case in his old stomping ground which he barely recognises these days.  With bodies being found in historically significant locations and with weird symbols on the murder weapons, the mystery and the threat it poses moves ever closer to Billy and his partner Hassan. Combine with O’Connor’s increasingly bizarre flashbacks, that seem to precede his lifetime, it appears that there are darker forces at work and that the grizzled detective’s Brooklyn blood may run deeper than he knew.

What begins as a typical murder mystery, with a disgruntled detective and hot shot partner combo, quickly descends in to a tantalising supernatural story which is where Levitz excels. His background in science fiction and fantasy serve him well as does the native New Yorkers’ local knowledge, which is used to good effect especially in Gowanus Canal and Fort Greene Park which are just some of the Big Apple’s locations Levitz explores and utilises in Brooklyn Blood . Casting O’Connor’s partner as a Middle Eastern female also lets Levitz cast his shadow over and examine racism and sexism in the work place, highlighting a very real issue and seeing how Hassan deals with the hand dealt to her makes for an inspiring read. The artwork also deserves plaudits as Tim Hamilton’s ability to portray the fear and anxiety in the characters and capture all of the story’s detailed gory glory is second to none.

Like CSI crossed with some weird 50’s science fiction B-movie, Brooklyn Blood, whilst grounded in the real world, is an incredible ride into the mysterious and unexplained which leaves you guessing right up until the end, whilst providing a satisfactory conclusion. It doesn’t get much better than this… Chris Andrews