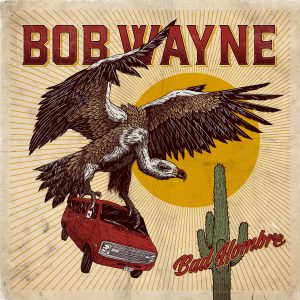 It’s time to belly up to the bar with a fifty proof bottle of Rye and Outlaw Country’s number one Bad Hombre Bob Wayne; shut the outside world and all of its bullshit out for day or two and let old Bob regale you with his tales of woe, life on the wrong side of the tracks, overthrowing the government and everything in between.  There’s no sunshine, no rainbows and very few happy endings in Bob’s world, this is the dark side of both kinds of music: Country and Western, and nobody does it better than this bad ass, hard drinking, ornery troubadour. Bad Hombre is a thirteen song trip through the depths of his bourbon sodden, narcotic addled soul that flips the bird at the mainstream and politely tells it to go fuck itself. See Bob doesn’t want those folks listening to his music. He writes songs for the kind of cats that feel the same way he does about the world. So if you’re sick of the daily drudge, political flip flopping and the constant stream of bullshit that we’re drip fed and expected to be grateful for, then chances are you’ll dig the crap of Bob Wayne and Bad Hombre. I know I do… Tim Cundle