Warning: preg_match() expects parameter 2 to be string, object given in /var/www/vip4/sites/vip6102689/httpd/htdocs/wp-includes/formatting.php on line 4866
 BLACK WING …IS DOOMED, COMING SEPTEMBER 18th FROM THE FLENSER - Mass Movement
x
Spread the love 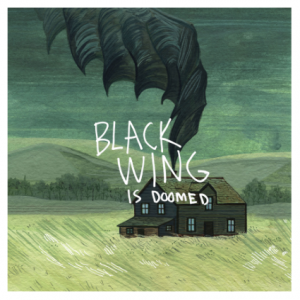 Dan Barrett, the man behind Connecticut-based Have A Nice Life, Giles Corey, Enemies List and countless other projects, has announced a release date for the first proper full-length from his digital-only solo project, Black Wing. Titled …Is Doomed, this seven-song album will be available on CD, LP and Digital formats from The Flenser on September 18th. The majority of the tracks on …Is Doomed are brand new, although the album boasts a mastered version of the widely-circulated song “My Body Betrayed Me”, which has been available on Bandcamp and made waves immediately upon upload. The Chicago Reader described the song as combining “a stark, mechanized postpunk beat, gentle shoegaze guitar hum, feathery ascending synths and Barrett’s cool, multitracked vocals into an uplifting, celestial tune that belies its heart-wrenching and bleak lyrics; even as he sings about dying Barrett manages to sound just a little bit blissful.” Watch the music video for that track, directed by Gardenback, here on the Flenser YouTube.

Barrett commented on the Black Wing project: “A while back I released a short, digital EP of me messing around with a lot of software instruments. This was after I watched Drive and enjoyed the soundtrack, and was really just me fiddling around. It got released as the ‘Drive 2 Soundtrack’ under the name ‘Dan Barrett and the Cruisers.’ I gave it away for free and promptly forgot about it. About a year later I ended up listening to it again and decided that there’s something fast and enjoyable about all digital stuff – no tuning, no strings breaking. It came at a good time (we [Have A Nice Life] were just finishing up recording songs from The Unnatural World), so I decided to jump in.” He continued, “Black Wing started as a sort of opposite to Giles Corey – whereas Giles started as ‘only acoustic instruments allowed,’ Black Wing started with ‘only digital instruments.‘”

Like all of Dan’s projects, Black Wing was self-recorded, at home, but this recording process was a bit different for him. At the time, Barrett was having some health problems – the first serious health issues he’d ever had – and was “…surrounded by all sorts of machines, lots of beeps and boops and what have you. I had a heart monitor strapped to my chest for a month. I was dripping a lot of blood all over the place. It was all very undramatic and fleshly and strange. I didn’t know what to make of any of it. Meanwhile, it was a beautiful, hot summer, sun everywhere. So I decided to just go ahead and make a depressive chillwave record – basically, music to listen to in the car with the windows down while feeling slightly melancholy and distracted.” The resulting seven tracks are gloomy yet uplifting, heavy while ambient, overwhelming yet alluring; resulting in one of the most remarkable electronic releases of 2015.

Track premieres from Black Wing‘s …Is Doomed will be unveiled soon. In the meantime, check out the track listing below and attached cover art by illustrator Becca Stadtlander. Also, news regarding the Giles Corey S/T re-issue this fall from The Flenser coming soon.