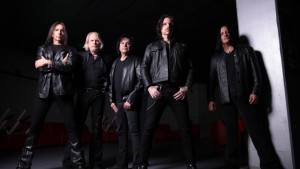 Black Star Riders are set to cap a hugely successful 2015 with two headline shows in the UK in December 2015. These shows are in addition to their guest slot on the fast selling Def Leppard/Whitesnake double bill in the same month. In celebration of the band hitting the road, we decided to speak to Damon Johnson and Scott Gorham about the band’s pre-show rituals and what it’s like for them to get up on stage and play for their fans

The band’s December tour dates rack up as follows:

2015 saw Black Star Riders release a new studio album, ‘The Killer Instinct’, to follow their 2013 debut ‘All Hell Breaks Loose’. Produced by Grammy winning Nick Raskulinecz (Rush, Foo Fighters, Mastodon), the album was released to widespread worldwide critical acclaim. The album also received major support at UK radio – with singles playlisted on BBC Radio 2 in addition to Planet Rock. March 2015 saw the band complete a sold out UK and Eire tour culminating in two nights at the iconic Shepherds Bush Empire. The band have since played to packed crowds across Europe throughout 2015.