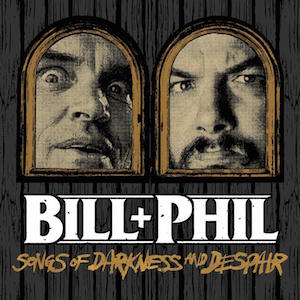 My family and I attended Spooky Empire (huge horror con in Orlando, FL) in 2015 and one of the many amazing people I met there was horror icon Bill Moseley. One of the things he and I discussed was the upcoming musical collaboration between Bill and Phil Anselmo. Well, I was stoked from then on, waiting impatiently for word of this album’s upcoming release. Fast forward to a time more than a year later when the EP Songs of Darkness and Despair landed in my inbox.

Surprisingly, Bill takes top billing on this six song EP as lead vocalist and lyricist with Phil taking a spot as the side man/backing vocalist. These two heroes of modern entertainment are joined by Kevin Bond (Superjoint), Squizzy Squires (King Parrot) and Jose “Blue” Gonzalez (Superjoint, Warbeast, Philip H. Anselmo & the Illegals). The collaboration is not a metal album as you and I might have guessed and nor does it, as I feared it might, suck. This is a quirky and fun romp through rock and roll with each song capturing a certain atmosphere in order to highlight the lyrical surprises offered by Bill. Songs of Darkness and Despair was worth the fourteen month wait. Jim Dodge