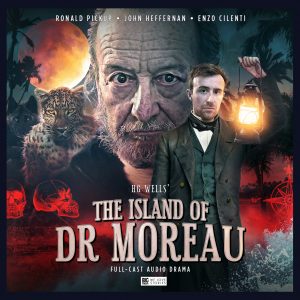 Big Finish mine the works of legendary writer HG Wells to deliver their latest audio drama, The Island of Doctor Moreau. I should note that I first attempted to read the novel many years ago and never returned to it.  Coupled with underwhelming memories of later film adaptations, I was a little reticent about revisiting this grisly tale of vivisection and the moral juxtaposition within.

The plot follows shipwrecked Edward Prendick (John Heffernan) who winds up being rescued and then reluctantly stuck on a mysterious island, belonging, of course, to the titular Dr Moreau (Ronald Pickup); a scientist whose earlier work was frowned upon. It is here Moreau is continuing his work conducting his experiments on animals, turning them into human-like creatures with limited intelligence. The typical tropes of morality, thrills and escape top and tail the story.

It’s a tale that is still relevant, switch the vivisection method with DNA manipulation and you have a modern and powerful viewpoint. But does it work?

Well, yes and no. The dialogue and performances are crisp and clear, the adaptation adequate and tooled with a period feel that works well.  The characters are a little two-dimensional, their lines a little stilted at times (given the source material, unsurprising), but the cast manage to breathe life into the production. Moreau is sympathetically portrayed, believing, as he does, in his work, whether misguided or immoral. David Shaw-Parker as the irascible ships captain is entertaining and Tim Bentinck as the man-ape creation adds poignancy and emotion to the role.

Effectively, it sounds like a movie, and therein lie the flaws.  Great sound is a great advantage in an audio drama, but it can also be an annoying element, used to pad out the production. Prendick having his breakfast, for example, should be short and precise, not lingered over – even a few seconds of superfluous sound can make the pace stumble, and this is the case here. There is also dialogue that is overlong and does little to help move the story along.

Still, this is classic Wells, and ably done. The moral questions are there and, truth be told, this is possibly one of the better adaptations. It’s a bleak tale, and delivers an underlying horror without the need to overstate it. Director Ken Bentley has done a great job getting some fine performances from the actors, but stumbles with the pace which staggers. It needs some sharp editing, in my opinion, to trim the superfluous dialogue and sound imaging.

Big Finish are good at their job and usually deliver great productions. The Island of Dr Moreau is good, but not one of their best. Paul Pearson