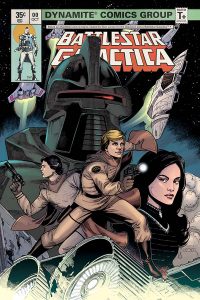 It’s hard to believe, but it’s been 40 years since Glen A Larson thrust a bold new series onto our TV screens, with Battlestar Galactica. Perhaps capitalizing on the success of another space based franchise launched a year earlier, BSG as it’s come to be abbreviated, was an instant hit and built a cult fan base with its storylines carrying more of a serial feel, rather than the usual monster of the week blueprint. In celebration of this milestone, Dynamite are releasing a new 6 book miniseries in glorious retro form, which will have fans of that era going frakking nuts.

The all new story written by New York Times best-selling author John Jackson Miller, who’s rich storytelling prowess can be seen in the excellent Knights Of The Old Republic –Star Wars series sees Lorne Greene’s Commander Adama facing some difficult choices. Presented with a unique opportunity to get one over on the red scanner faced ones, Adama has to decide if taking that path will thwart the continuing the search for the elusive Planet Earth, with the remains of the human race, who are still locked in a desperate fight to survive, or take the opportunity and deal the Cylons a huge blow. All our favourite characters from the series are present and captured perfectly by artist Daniel HDR, who’s penmanship is in the style of the era, but thoroughly modern at the same time. But most importantly the essence of any BSG storyline, its characters, is perfectly preserved.

Dynamite have really captured something here. With an engaging storyline that looks great and with a retro price tag hanging off the release too, it’s the perfect opportunity to immerse yourself in another enduring sci-fi franchise. And if like me, you were buying comics in the 70’s and 80’s then you have a wonderful chance to relive the glory days by picking up a great book that costs less than your back pain meds … Chris Andrews