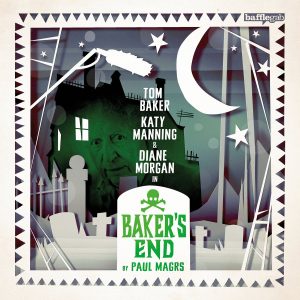 ‘They seek to allay our fears…about the other side.’ ‘You mean ITV?’

Fed up with things being a bit rubbish?  Need to escape from the depressing trail of bad news stories that has become your Facebook feed of late?  Then I invite you, cherished listener, to pour yourself a glass of something strong, settle into an imaginary (or real) wing-backed chair and take an hour out of your life for a bit of  Tom Baker. You know it makes sense.

If you listened to The King of Cats, the first part of Bafflegab Production’s Baker’s End, then you’ll know what to expect here. And if you are a fan of glorious Charlie Brooker creation Philomena Cunk, then you’re in for a double treat, as Diane Morgan (the mighty Ms. Cunk herself) gets a starring role in the second part, Gobbleknoll Hall.

Following on from The King of Cats, the village of Happenstance is thrown into disarray when a television crew arrives unannounced in the middle of the night. It’s the one and only Marcella Doody and her team from top TV ghost hunting show Manifest Yourself, and they’re here to hold an overnight vigil in Happenstance’s own house of niff-naffy repute, Gobblehall Hall. But Tom’s worried. It’s Beltane, and there may be more going on than just ‘ghostly doings’…

In places, The King of Cats was just a bit too much for me. It ran at 100 miles per hour from the off, and though it was lots of fun, it all got a bit confusing towards the end. Don’t get me wrong: Paul Magrs’ script for Gobbleknoll Hall still rattles along, is still as barmy as a box of *stumber-wangles, but is a little less breakneck. I actually welcomed this change of pace as it makes for a far more cohesive and coherent story, but don’t worry; there are plenty of things here that will fair make your wiffle-waffles perk up, and Tom Baker gets to let loose with some completely over the top Jabberwocky-evoking set pieces.

One more thing. I have to dedicate this final paragraph to Diane Morgan’s irritable, world-weary delivery as Marcella Doody. She is a wonderfully pissed-off counter to Tom Baker’s excitable lunacy, and the two of them bounce off one another brilliantly. Yep. This is properly frumbumptious.  Bex Ferriday

*I made that one up. It’s what listening to this will do to you.