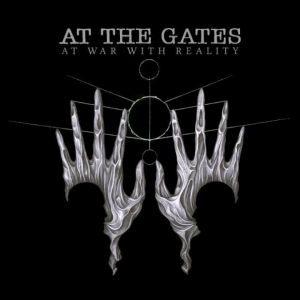 At The Gates – At War With Reality CD (Century Media)
‘Slaughter Of The Soul’ was a really good slab of Swedish death metal, so, a long awaited follow up was sure to be no easy task… but ‘At War With Reality’ is a razor sharp record of riffs and untarnished heaviness leading you into the abyss of aggression and much darker atmospherics – well worth the lengthy wait since the highly anticipated reformation. I could tell you about the sturdy song structures, or the technically precise fretwork of Bjorker and Larsson, but that would be detrimental to any reputable metalhead, as this classic line up unquestionably belts out twelve tunes (and a enthralling intro speech) once again compounded by Thomas Lindberg’s guttural throat lacerations. At The Gates exorcise an edge of antagonism but combining it within a melodic power, they create a beast of sound many imitate with poor pastiche. The thrash elements remain prominent, the death metal antidote continues, the groove is still enough to enforce the song configuration – giving even the slower moments a real weighty reverberation. ‘At War With Reality’ demonstrates crushing authority. At The Gates have continued with a grandiose old school presence and added a contemporary output ensuring their existence in the world of millennium metal is truly felt. Their reputation as one of the most important and innovating bands contributing to the Gothenburg sound has been well and truly established with no doubt what-so-ever of the quality this album delivers. Mark Freebase