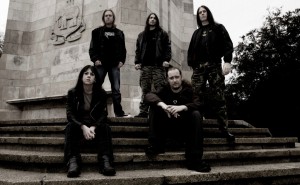 Totally sold out! And not surprising looking at the bill, there was a real buzz shaping up about this year’s festivities…
Not that the weather was going to affect anything as it was all under cover, but it was a nice feeling to walk down towards the University Union in shorts and a T-shirt under a sunny sky, in November (when is the last time that has happened in the UK?). Everyone upon approach seemed to be in a very euphoric frame of mind, things were already starting to become a really pleasant day. Crowds of black clad t-shirts swarmed the outer surroundings; a metal presence was established for one of the most extreme gatherings to take place during the year. First impressions seemed this was going to be a busy festival.
It was great to enter upon a slick and well-organised guest / press set up, and the lack of queues meant a swift run right through to the bar, ready for the first liquid refreshment of the day, before familiarising oneself with the labyrinth of the venue. It took a little figuring out, and working out the four stage areas along with social gatherings, but proved to be an impressive layout, pretty perfect for a metal festival of this size.
After flitting between several levels and stages the first serious viewing of the day was from recently reunited UK stalwarts Stampin’ Ground. Now no matter what your stance on this version of the band is, they played a strong set (maybe too many newer songs for my personal liking) but did a solid job with a front man who can work the crowd. The punters seemed to lap them up and with the likes of ‘Officer Down’ a suitable level of chaos ensued. “This will be the last gig for the foreseeable future, we are not sure what will happen” may answer the question many have asked. Good at what they did, but alas, not the Stampin’ Ground many know and love. However, they left the Jagermeister stage with a performance that made an impact. With recently released album ‘Deathless’ the thrash/death machine that is Revocation laid waste to a packed out Terrorizer Stage. These guys threw out an onslaught of revitalised brutality, yet kept the technicalities entailed and showed a cleverly crafted side to their version of extreme music, winning the positive response of the ever-swelling crowd. How many more people could they squeeze into this basement stage?

Revocation were a perfect choice for Damnation, my only gripe here was the quality of sound, it could have been a bit better for this stage as it was a wall of fast, hard and heavy reverberation. The trip back up the countless stairs into the perfectly decked out Jagermeister main stage for the mighty Orange Goblin was well worth the manoeuvre. Any band playing this stage today was subject to perfect viewing from the audience, due to the venue layout, and every band benefited from the immaculate acoustics, amplifying the positive output. OG rumbled out their brand of home brewed UK heavy metal to an overwhelming response, almost as if Damnation had been waiting to see these guys for years. Mixing a set of old and new tunes seemed to leave the entirety of the room in complete euphoria, as they knocked back flagons of ale and banged there heads to the dirty riffs and heavy grooves. Plenty of live shows over the past year and a half has seen Orange Goblin hone their sound, and improve their stage antics no end, and the current jaunt with heavyweights Saint Vitus (who were up right after) saw a band firing on all four cylinders – great to see a UK band doing so well at the moment. Orange Goblin were raising the standards of today’s performances, and after their set also found time to hang out with the fans at the merch stall – these guys seem to have their feet firmly on the ground still.

So for Saint Vitus to follow proceedings of such quality today, well what can I say? Simply, they did it with ease. The heavy drones of guitar, the wails of Wino and the solid doom rhythms carved an epic stance on Damnation 2014. The weight of this antique metal crew was completely lapped up by the entirety of the main hall, and emphasising ‘Born Too Late’ proved to be a crushing set, a damn good pummelling for all in it’s vicinity. Faultless sound, and a groove that none can moan about left the audience with yet another tick in the box of precision for all involved at Damnation.

Now with the ever swelling crowd, and my worries of the size of venue, it was a sharp dash to see if we could enter the compounds of the Terrorizer Stage for the biggest death metal band of all time Cannibal Corpse. They splattered the interior of the venue with such heavy sounds, and probably scarring ten shades of shit out of those not familiar with the CC style, but in all honesty Cannibal Corpse should off been upstairs on the larger mainstage area. The heat was unbearable down here, and the sound (as mentioned before) did suffer somewhat, so it was half the way through the intensely brutal set a sharp exit was made back up stairs, for fear of maybe not getting in to see the festival headliners.

As exit was made, a one out, one in policy was in place leaving many people short of catching the most extreme band of the day. So with Bolt Thrower providing their only UK appearance for some time, here, the crowds were morphing into a tide of anticipation. Everybody was ready to encounter the severe heavy metal grindings of the Midlands metal machine. Both Thrower churning out their T-shirts at a tenner, no wonder every other person in the venue seemed to have one, a smart move, and a very well orchestrated air if anticipation was in creation. Hammering out an array of classics, a shear heavyweight of riffs and an undeniably crushing sound Bolt Thrower proved to be a perfect headliner and festival closer, leaving no doubt what so ever as to the greatness of today’s proceedings. Bolt Thrower came, and masterfully conquered all at Damnation 2014 rightfully earning the warmaster title.
All accomplished for the ticket price of £36 and due to the amount of bars situated in many of the areas, it was an easy ride, and made for a grand day of non-waiting (unlike so many other events) and with food stalls present meant that the need to exit the venue was bought to minimal efforts. Roll on Damnation 2015. Mark Freebase