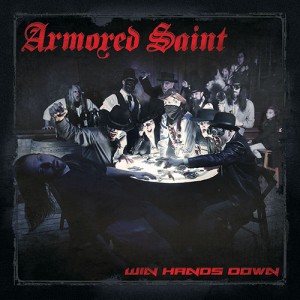 Armored Saint – Win Hands Down CD (Metal Blade)
John Bush’s vocals are probably at an all time high. He has a knack of getting a lot of lyrical content included, whilst not compromising the power with which the band executes its smashing delivery. Armored Saint have released an album here that will stand the test of time without a doubt. It’s full of their classic mood, but breathes heavily with contemporary sound. ‘Win Hands Down’ is nine songs of crystal clear, potently delivered, solid rock/metal and their is no denying these guys are going to demolish the summer festival circuit if they air the likes of ‘Mess’, ‘An Exercise In Debauchery’, ‘Muscle Memory’ or the overwhelming title track. There is a lot of life in the expressional way these guys deliver each song, there is a lot of space around the music, and whether it’s a positive recollection or a feisty poke at something they tend to disagree with there is not one iota of negativity present. ‘Win Hands Down’ has the enigmatic feel of the much-missed 80’s but the clarity of millennium benefits; this is in no way regression. Mark Freebase