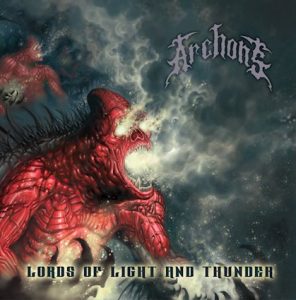 I am not particularly fond of super heavy metal.  I’ve always been drawn to the louder side of music, but there’s a thin line for me between heavy and just noise.  Listening to Archons newest offering, Lords of Light and Thunder, reinforced just exactly where that line resides.

Is it good?  Well I guess that depends on your taste, but having heard my fair share of hardcore music both live and recorded, I can honestly say that Archons covers all the bases of a solid metal band.  While some tracks are a bit over the top for my liking, a majority of this record lands firmly in the HELL YES category, and I found myself bouncing along a lot more frequently than I thought I would upon first listen.

From the first few seconds of the album, I felt like I was being full on assaulted by sound.  The feedback heavy riffs slap you right in the face, and the vocals evoke the feeling of riding an out of control locomotive straight into a bucket of chainsaws.  My initial thought was that I’d heard all this before, and I was ready to be unimpressed and uninspired.

Fortunately, I couldn’t have been more wrong!  Progressing through the album, I found that there were more than a couple songs that transcended the stereotypical metal playbook, and those were by far the songs I enjoyed the most.  Black Lotus opens with a trippy, outer spacey sound, and unwinds itself into a track that brings to mind a classic Fear Factory vibe.  I hit repeat on this song a couple of times, and every time I listened, I enjoyed it a little more.

Mysterians is as close to a ballad as Archons comes on this album, with an awesomely heavy but still somehow melodic slant – guitarist Jeff Haynes really shines on this track, blending crunchy chords with intricate riffs in a way that’s new and exciting while still evoking that good old heavy metal nostalgia.

Overall, Lords of Light and Thunder far exceeded the expectations I had when I first hit the play button.  This is an album I will enjoy putting into daily rotation, and I can only hope that Archons decides to tour nearby – these guys sound like they’d put on one hell of a show! Natascha Hill