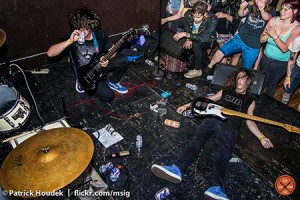 Portland’s Mean Jeans have long been a favorite of ours at the FAT office, and now we get to put their next record out! We couldn’t be more excited to welcome their high octane sing-along anthems to the FAT catalog. We’ll be releasing their third proper full-length in 2016, so stay tuned for those details. In the meantime, head over to their bandcamp page, take a listen and scope out their remaining tour dates for the year. Best of all, read what drummer/vocalist Andrew (aka Jeans Wilder) had to say about FAT below.
The very first show I ever went to was in 96 in Vienna, Austria to see NOFX, Weezer, and Lagwagon. I remember purchasing a Lagwagon ringer tee and putting it on immediately, because wearing a shirt of the band you are seeing is the cool thing to do. Especially since I hadn’t even heard Lagwagon before. A year later I bumped into Chris Flippin outside of a show at that same venue and he brought me and my friends on the Lagwagon tour bus. We talked about how Blink-182 had dropped off the tour because they had to film the video for Dammit and about how the new album Double Plaidinum was somewhat of a departure from Hoss. Later that year I shit my pants* on the way home from a Good Riddance show. Many many years later I acquired Tré Cool’s cell phone number and tried to trade it to someone for Fat Mike’s cell phone number. I was denied. Needless to say, myself and the Mean Jeans are very excited to be joining the FATfamily. It is 5:30am on our way to FEST so excuse the boring story, it’s the best we got at this time of day.