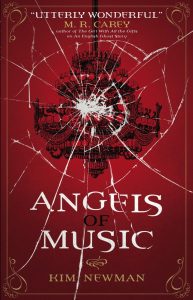 Good morning, Angels! Good morning, Erik! Yep, Kim Newman’s Angels of Music really does deliver what it says on the tin, a trio of female investigators, each with unique talents, working for the 19th century equivalent of Charles Townsend Investigations, the O.G.A. or, fully, the Opera Ghost Agency, run by, you guessed it, the Phantom himself. If that concept isn’t mad and enticing enough, how about instead of Sabrina, Kelly and Jill we have Christine Daae, Trilby O’Ferrall and Irene Adler? At least to begin with. For like Charlie’s girls, this chorus line changes and evolves as the seasons and events roll on – and, believe me, roll on they most certainly do. Angels of Music is a book crammed with events big and small, the ghostly mirror in Dressing Room 313 through which the Opera Ghost issues edicts a springboard for a series of diverse yet linked adventures that would almost threaten to overwhelm were they not mercifully divided into five distinct, novella-like acts.

I strongly suspect Newman could barely control himself once his initial premise had taken hold, and indulges himself in almost every fantasy his setting provides – an early scene has the Angels stripped to their underwear dangled above a vat of bubbling wax taunted by a cackling dwarf – but this is not cliched sexist or un-PC stuff, rather joyous celebration of pulp, of Saturday-morning serial, and most of all the capabilities of fictional ladies given a chance to expand and to shine. Newman loves it, name-dropping left, right and centre, and all the while gifting genuinely funny throwaway lines and situations – a later Angel chops off the hands of abusive men and slaps them with them – with a momentum that he maintains right until the final revelation of the book. I don’t like most of what passes for fiction these days; I loved this. Mike Wild