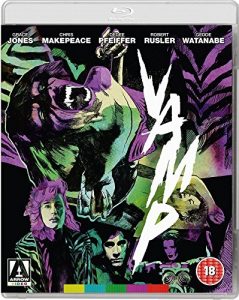 It’s sad but true – not all things from the Eighties are as good as you remember them, and whilst Vamp isn’t horrendous when re-visited 30 years down the road, it also hasn’t aged particularly well. Drenched in pink and green neon, with a soundtrack that veers between soft rock and droning reverbed electronics, it’s very much of its time, and, possibly inspired by the success of Fright Night the previous year, attempts to morph the well-trodden frat-boy comedy into a sexy vampire-laden horror comedy – with mixed results.

Grace Jones owns the screen as main vampire Katrina, dripping mystery and hunger, but is criminally under-utilised. The rest of the cast turn in performances that range from workmanlike through adequate to downright cheesy, and both the script and the plot leave a lot to be desired in the wit and imagination stakes.

This has been described as a possible inspiration for From Dusk ‘Til Dawn but Robert Rusler is no George Clooney, and Grace Jones is no Salma Hayek. There are also hints of The Lost Boys to be had in the trench-coated albino gang that terrorise our protagonists at various points throughout the film, but Vamp doesn’t have a fraction of that film’s effortless cool. It’s not scary in the slightest, so it needs to be either really funny or really gory to elevate it above the status of ‘also-ran’, and unfortunately it comes up short in both departments. There’s a general lack of focus and tension, so whilst it looks nice enough, you ultimately don’t give a toss what happens to the characters in the end.

Still, it’s young, dumb and full of bodily fluids of various descriptions, and if you’re feeling nostalgic, or you’re a massive fan of Grace Jones, there’s definitely worse ways to while away a few hours. Arrow have spiced it up with some decent extras too – the rehearsal footage of Grace perfecting her backstage seduction of A.J. is a hoot, and Richard Wenk’s short film, Dracula Bites The Big Apple, is beyond bonkers. Ian Glasper