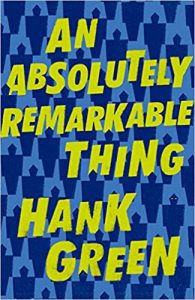 Love it or hate it, we are now deeply into the digital age. Everything we do, every move we make is captured and processed, sometimes by big brother and sometime by ourselves via social media. We now  live in a world where we have bloggers, vloggers and influencers, who insist on thrusting their lives upon us all in the name of “likes.” It’s subjective of course and not completely designed in Hades own offices and we are, for now anyway, able to pick and choose, who we want to listen to and one person that I would gladly listen to is Hank Green. Since 2007 Hank and his brother John, have presented various shows on YouTube, some for entertainment and some for educational purposes, but all factual and interesting viewing. Stepping away from the digital age for a short while Hank has now released, his first novel An Absolutely Remarkable Thing, which combines his love of sci-fi, with his skills and experience as a vlogger.

Showcasing just how powerful a video can be, the books protagonist April May happens upon a giant sculpture at 3am in New York City, which she christens Carl. Being the modern person she is, May makes sure to take video footage of the sculpture and uploads it to the internet. April’s life will never be the same upon waking to a video that’s gone viral and the news that Carl’s are popping up all over the world. April has to cope with her new found fame, whilst being at the centre of a mystery that could change the world forever. Who or what are the Carl’s?

This is gripping storytelling that transposes all of the elements of classic science fiction mysteries like War Of The Worlds into a very modern world and you’ll love to hate April as fame buries its claw in her, but most of all this book is a glimpse into the darker side of human behavior and begs the question “What is the price of fame?” You’ll take one of two things away from this book. You’ll either be disgusted by what’s happened to your fellow humans or you may just find something to restore your faith in humanity. Whichever it is, you’ll be thoroughly entertained by An Absolutely Remarkable Thing... Chris Andrews