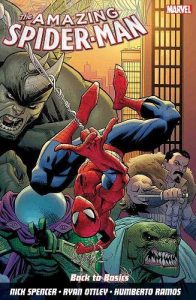 In a “How much more prophetic could the title of a book be” competition, Back to Basics would not only win first prize, it would probably get some sort of special mention for going above and beyond the call of duty as well. It might even be nominated for an unspecified medal for being the most accurate and on point title in the history of comics, because Nick Spencer does exactly what it says on the tin (or in this case, the cover) and takes Spidey nearly all the way back to beginning. Okay, so he doesn’t literally take him back to the start of his career as a costumed crime fighter in a weird, time warp sort of deal, but he does alter the wall-crawlers circumstances and complete his fall from corporate grace by plunging him back into the halls of academia and turning him to an army of one. Adhering to the mantra that just when you thought things couldn’t possible get worse for the hero of the hour, Spencer takes away what little Pete has, the respect and friendship of his fellow heroes,  and a steady job in the offices of the Bugle following an academic scandal and the always unwelcome interference of the new mayor of New York, Wilson Fisk. But as fate slams one door in his face, it re-opens another for Pete as he the only woman he was ever supposed to be with walks back into his life and an old friend offers him an opportunity that he can’t turn down.

It’s that aforementioned opportunity that forms the basis of the main plot in Back to Basics, as the acquaintance in question is none other than Curt Connors.  While deciding what to do about the former and forever Lizard’s offer, Pete is granted one of his deepest seated desires, the chance to see what his life would have been like if he’d never been bitten by a radioactive arachnid and hadn’t become Spider-Man. But he soon learns that you should be careful what you wish for, as his alter-ego runs rampant in New York and Pete finally realises that Spider-Man needs him as much as he needs the webslinger.  I know it sounds confusing, but trust me, if you read the book (and you really, really should) it won’t be as this web-centric plot thread along with a multitude of others including the return of a couple of Spidey’s oldest foes, his acquiring a new and unusual roommate and his slow, but determined push to slowly rebuild his life, after it’s been completely turned upside down, with the love of his life by his side push Pete onward in the pages of Back to Basics. So far Spencer, as the new guardian of Spidey’s fate, seems to be in top form combining a first rate, pulse pounding tale with on point characterisation and knock out dialogue and Ottley and Ramos are drawing up a storm, transforming their wordsmith partner’s story into a gloriously detailed four colour reality. As new beginnings go, it’s a doozy. What time is it? That’s right folks, it’s Spider-Man time… Tim Cundle