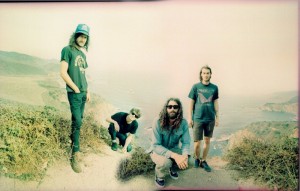 Tree-top flying through doom-blues pastures and stoned, desert-rock passageways alike, the band ground their sound with a solid skeleton of song writing. From the downbeat acoustic arpeggios of album opener ‘Call Me Star’, slowly melting into grittier chords and leading into the firebrand distorted bass of the barn-burning ‘El Centro’, inspired by a rowdy show performed out in the wayward town of El Centro, California. To the cerebral, sweeping ‘Open Passageways’, mined from vocalist and bassist Charles Parks’ experience stranded and broke in the remote locale of Elmgrove, Louisiana in a house once owned by his grandmother. This four-pronged sonic militia paint from a diverse sonic palette.

Recorded live in the unlikely spot of Dollywood capital Pigeon Forge, Eastern Tennessee, the band built a studio with producer Mikey Allred in a remote cabin up in the mountains where they lived and made the album over the course of six days. “Pigeon Forge is tourist central, with Dollywood and moonshine distilleries, pancake houses, and Christmas stores everywhere”, Parks explains, “but our cabin was up on the mountain. We were the only ones there and didn’t have to worry about anyone calling us in for being loud. It was quiet. In the morning, the mist would be hanging over the city, then it would clear up and you’d see all these terrible tourist shops. It was nice to know we didn’t have to be a part of it. There’s a duality that happens throughout this record, that of the solitude of the mountain and the absolute Babylon that is Pigeon Forge.”

Shaped by an early exposure to jazz, “especially Sun Ra, and ambient music like Brian Eno, Boren and Der Club of Gore”, drummer and founding member Robby Staebler explains the band’s influences cut a wide swath. With their embryonic live performances often coagulating into a singular unit, a live-wire electrifying sound, which was captured on their first two studio albums, Our Mother Electricity (2012) and Lightning at the Door (2014).

If those records were a snapshot of the bands onstage chemistry, Dying Surfer Meets His Maker is an evolution into sophisticated psych-rock that’s ever-lurching forward, but never spirals out of control. “This band is like having four guitars,” Parks says, “I play bass like a guitar, Allen plays keys like a guitar, and Robby even plays drums like a guitar: he’s doing fills and rolls. It’s almost like the percussive element of fingerpicking, the sound of fingers on strings.”

“None of our shows are the same twice”, Parks says. “We like not having to get up and play our songs the same way every night. It’s like jazz, where the main parts are there, but the rest is made up. We never say it, it just happens, we let the music talk for us.” Catch All Them Witches live in the UK in 2016 on the dates below.