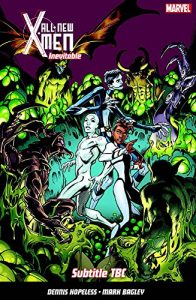 Still on their extended vacation, the All New X-Men find themselves at something of a loose end when Beast retreats into his laboratory to do… well, the things that Beast does behind closed doors. Which no doubt involves lots of test tubes, incredibly hard mathematical equations, complex circuitry and quantum physics. Or at least it used to before he discovered magic and its relationship to -and with- science.  In his quest to better understand it, Beast parked the X-Men’s surprisingly roomy caravan over the portal to a Hell dimension, which is partially (and by partially, I of course mean almost entirely) responsible for the catastrophic mess they find themselves in. But I digress, because before the inevitable storm there’s lots of dancing as Iceman -with a little help from his friends- finally relaxes enough to venture out and meet a world of potential partners. There’s romance as the aforementioned Iceman gets up close and personal with the Inhumans and Wolverine and Angel finally put their past behind them and rekindle their relationship, following their discovery of a shared passion for unrelenting bloodshed and sickeningly brutal violence. And then Cyclops, waylaid after his fateful encounter with Toad, lets his curiosity get the better of him and decides to find out exactly what Beast has been up to; which doesn’t end well. Which is probably one of the biggest understatements of the year as Hell opens up and an invading army of demons pour forth. And guess who the only heroes standing in the way of the world being trampled underfoot by the rampaging horde of monsters are? That’s right, the All New X-Men. But such is the life of young mutant superheroes.   Even when they’re on holiday, they just can’t seem to catch a break.

Hopeless and Bagley are like one of those seventies cop show partnerships. On their own, they’re each the toast of their particular departments, with the former writing up a storm and the latter dealing out page after page of devastatingly detailed and intricately sumptuous artwork, but when they’re brought together, they up the ante and turn everything up to eleven. I’ve made no secret of the fact that I was never much of X-Men fan until Bendis seized All New X-Men by the reins and transformed it into something that I loved, but now thanks to him and Dennis Hopeless’ guiding the destinies of Marvel’s premier mutants, I can’t get enough of them.  Bursting with snappy, sizzling, wise-cracking dialogue, seamless characterisation, the kind of plots that prime time TV writers would sell their souls to Satan to come up with and gorgeous artwork that you could stare at in open mouthed astonishment for weeks on end, Hell Hath So Much Fury has made sure that I’ve stayed on, and not even thought of venturing from, the mutant path to salvation.  And it’s all thanks to Bagley and Hopeless, after an initial push from Bendis that I keep returning to the sacred church of the X-Men time and time again. Hallelujah brothers and sisters, hallelujah…  Tim Cundle