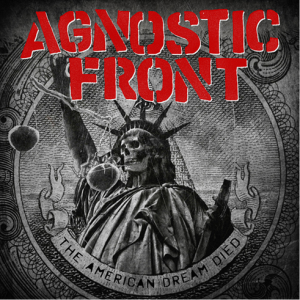 Vocalist Roger Miret comments: “We chose this title cause we want to open up people’s eyes to what’s going on in this country. We have a lot to say. Not everyone realizes that our government and the people who run this country are so corrupt, greedy and ruthless. We need to educate the ones we reach. We’re losing our values. We address real issues from full blown corruption and scandals to unjust police abuse and brutality. Everything we stood for as a country is going down the drain. But we still somewhat have our freedom of speech. We’re expressing it all through this record while we can.”

‘The American Dream Died’ was produced by MADBALL singer Freddy Cricien and engineered, mixed and mastered by Paul Miner (H2O, TERROR). It will be released April 6th 2015 via Nuclear Blast Records.

The record will feature guest appearances by Cricien, Toby Morse (H2O) and Lou Koller (SICK OF IT ALL).