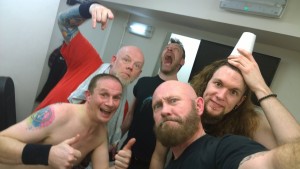 For all the old school thrashers like myself this band need no introduction. The UK’s very own ‘kings of silly’ have recently been tearing up audiences with a long overdue brace of dates, so MM caught up with them in the run up to Hammerfest 2016, a festival that’s sure to be filled with mayhem and chaos…

MM: With Hammerfest on the horizon, what are your thoughts on Acid Reign’s inclusion? You’ve had a successful run of ‘return’ gigs and a well-received welcome at the Eindhoven Metal Meeting so far…

H: Well, we are very excited about this. Hammerfest were the very first festival to approach the rebooted line up and offer us a slot before we had even played ANY of those ‘return’ shows as you call them. So we feel like we need to pay them back for the faith they showed in us and make sure we all have a good time of course!

MM: Hammerfest is fast establishing itself as a known and respected entity in metal-heads diaries, so how easy was it to actually say yes, and come to an agreement?

H: Well as I said above the guys who run it got on the phone to our agent and made us an offer, we accepted it, the end. Dead simple.  [laughs]

H : Who knows? In the current climate in the music industry I think we’re all just living month to month, anything can happen! I’d hope we’ll be around for a few more years put it that way. We’re writing a new album and not looking any further into the future than that. We have had a fair amount of interest on the back of ‘Plan Of The Damned’ so let’s see what happens once we have an album in the can… 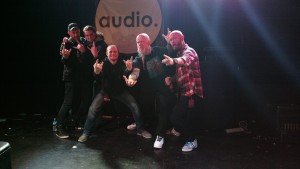 MM: Have you had much encouragement from the bands that you knew ‘back in the day’?

H:  Yeah, and that has been very cool actually. I interviewed Gary Holt for my podcast recently and he was all “Dude, you got the band back together that’s awesome!” and the list goes on Flotsam & Jetsam, Senser, all our old mates in Re-Animator, and Xentrix of course! Re-Animator knows better than anyone else everything I went through to get this line up going; we’ve been talking about it for two and a half years!

MM: Do venues like Milton Keynes, Woughton Centre (The Pitz) still hold fond memories for you?

H: Oh yes it does, definitely, as does, Edinburgh The Venue, Duchess Of York Leeds, Parr Hall Warrington, McGonagals Dublin, The Marquee London and some more that I can’t even remember!  [laughing]

MM: Acid Reign were always well known for your sense of humour. Is that still a big part of the band today?

H:  Humour will always be a part of our make-up, a lot of that comes from not giving a shit. If we had a band motto it would be “when in doubt, don’t give a shit”. But we don’t ‘cos band mottos are for dicks! 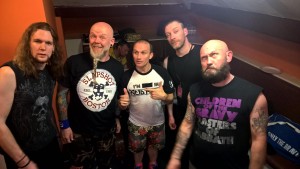 MM: How does it feel to have the 7″ hit the number one spot in 14 different countries?

H: Very similar to it not going number 1 in 14 countries, strange that…..

MM: Jokes aside H, you’ve only released one new song so far…  Why?

H: Coming back with a new album would have been pointless. Look at every single one of those bands who have come back. Have any come back with a new album? No. They came back, played a few tours, just did the old stuff and then start integrating new material, with maybe an album after that. It would have been another year to write an album, instead we played some shows to announce we’re back and are working on an album now. But, ONLY because POTD went down so well and people said they’d like one. If there had been a big old “Meh” after releasing POTD then we wouldn’t be writing a new album.

MM: So what can we expect from the Acid Reign show at Hammerfest 2016 then?

H: Some very fast, heads down, old school thrash metal played by five guys who are absolutely focused on making sure everyone has a good time. That’s what it’s all about, let’s hoof it and hoof it good!  As for crowd reaction, we were very surprised by the reaction we got in Eindhoven before Xmas. People were actually there especially to see us! So given Wales is nearer home I’d settle for the same reaction again, if not better cos back in the day Wales always loved us and we loved playing Wales. If you don’t know us then turn up and find out if all of that is a load of bollocks or not.

MM: Which releases will you focus your live set on?

H: There’s no “releases” consideration when it comes to writing a set list. It’s full of the songs that we know everyone wants to hear, we will keep adding songs the longer we’re around until we reach headlining status. We’ll be playing a song at Hammerfest we haven’t played for 26 years, gotta throw something “new” in haven’t we!

MM How have you changed since Acid Reign’s initial run, and how has your approach to being in a band xchanged these days?

H:  Well I’m 46 as opposed to 19 so how have I changed? Totally. How has the experience changed? Totally. I suppose the biggest thing is that everything is a lot more relaxed as we’re doing it for fun and not  to earn a living. When it’s your job it does suck the joy out of it a bit.

MM: Just to add a piece of nostalgia for old school fans of the band…  I recently sold an original ‘Moshkinstein’ T Shirt on E-bay for a substantial amount of money. How does that make you feel?   (I know it makes me feel fat as it was a size medium!).

H: It makes me feel great, I’m still a medium you fat bastard! Seriously thanks for the interview and hopefully we’ll get a chance to catch up at Hammerfest and that goes for anyone reading this. Say “Hi” if you see any us, you never know if you’re really lucky we might let you buy us a drink.

‘Plan Of The Damned’ is out now on 7” etched vinyl 7” via Dry Heave Records.