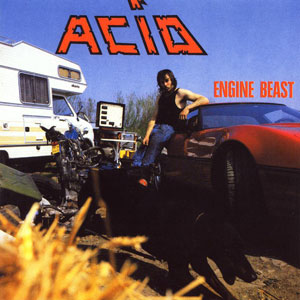 ACID – Engine Beast CD (HNE Recordings)
Third in a trilogy of classic re-releases from the exhilarating Belgium metallers. The third part of the lengthy and formal interview also brings a fitting conclusion to the ten songs here on their final album. As with previous releases ACID prove once again they should of reached greater heights, they should have been a bigger band, so thankfully any of us missing out first time round can now get to hear classics ‘S.T.C’ and ‘Lost In Hell’. With a guitar sound that rivals early Iron Maiden, and even hints of early Metallica the raw energy of the band generates an amplified ferocity – mostly trad-metal, but at times catching the attention of thrash metal fanatics. ACID are foot to the floor full on metal, and vocalist Kate is so charismatic with her role. The noisy metallic beast, bolstered with great choruses epitomises what this music is all about. Bonus tracks (six in total) of unreleased, demo, and alternative versions are a nice extra, but not essential, as ‘Engine Beast’ will certainly have you reaching for your cut off. I leave you with some fitting lyrics – “Acid is the name… heavy metal is the game”. Mark Freebase