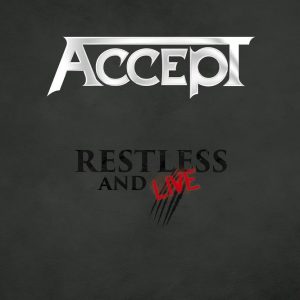 Now this is an enticing double live album, twenty-seven songs long, or four-disc vinyl if you can get hold of the limited box set; it is, a quality package. Accept are at a high point in their career, their power and prowess is on a level second to none amongst all heavy metal veterans, and since releasing three fantastically strong albums from 2010 on, former T.T. Quick frontman Mark Tornillo has driven the band forward and ever onward . His live performance is supreme, combining authoritative vocals and superb stage presence meaning that old school fans won’t be disappointed, whilst newer Accept fans already know just how good he is. All the classics are thankfully here as you’d expect, London Leatherboys, Flash Rockin’ Man, Midnight Mover, Restless And Wild, Son Of A Bitch, Metal Heart, Balls To The Wall, along with the all-time favourite Fast As A Shark, and unlike so many other bands, Accept hammer out these tunes with real conviction and power. They don’t sound like old men playing young men’s songs and their musicianship speaks for itself. Accept don’t sound dated in any way, the older songs sit side by side with newer monsters like the bone crusher Stalingrad or the neck-wrecker Stampede. Here is a band that sees no divide between multi-generational audiences, and the sterling production job along and killer live sound fully represents the German luminaries at their very best. It’s great to hear a couple of rarer played tracks on the set-list, with the band unleashing Demon’s Night which is a real crowd pleaser. Restless & Live takes me back to when I first discovered Accept in the early 80s and they sound as captivating and exciting today as they did back then. Fast ‘n’ heavy!   Mark Freebase