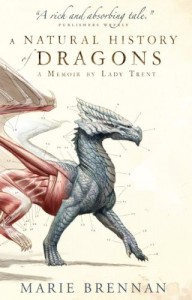 A Natural History of Dragons (A Memoir of Lady Trent) – Marie Brennan (Titan Books)
From Scirland to the farthest reaches of Eriga, Isabella, Lady Trent is known to be the world’s preeminent dragon naturalist. She is the remarkable woman who brought the study of dragons out of the misty shadows of myth into the clear light of modern science. But before she became the illustrious figure we know today, there was a bookish young woman whose passion for learning and natural history defied the stifling conventions of her day. Here at last, in her own words, is the true story of a pioneering spirit who risked her reputation, her prospects and her fragile flesh to satisfy her scientific curiosity; of how she sought true love and happiness despite her lamentable eccentricities; and of her thrilling expedition to the perilous mountains of Vystrana, where she made the first of many historic discoveries that would change the world forever.

So, with the merest mention of dragons in a novel’s totally, I’m usually sold and when the first thing you see is an incredible cover, such as the one that adorns this book, then that’s it. I’m already hooked.

‘A Natural History of Dragons’ though, from the synopsis on the reverse of the cover, had me a little confused as what to expect from the pages inside. Set out as a memoir in which dragons are a part of the real world, and instead of the usual, highly intelligent creatures they are normally portrayed as, they’re described as animals, seen in much that same way as we would see any other beast.

Brennan has an absolutely beautiful descriptive style, keeping the setting pretty bare allows everything to be expressed by, and seen through, the thoughts and feelings described in Lady Trent’s memoirs, a woman who grew up obsessed with the declining populations of Dragons and her resulting studies of them.

This is in no way a standard fantasy novel, and I appreciate that the format may not be everybody’s taste, but the sheer quality of Brennan’s writing alone makes me urge you at least try it. Who knows, like me, you might just end up loving ‘A Nautural History of Dragons’… Gav