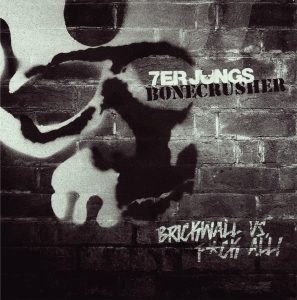 I’ve been a fan of Bonecrusher for a long time, so a new release of theirs is always a winner in my book. This time they’ve teamed up with German band 7er Jungs who although I have known about for a while, have never actually heard, so here you go – something old, something new.

Starting off with the South California glass-garglers extraordinaire, my favourite release of theirs is an album called Working For Nothing. It came out in around 1998 and at the time, they struck a chord with everyone – tough enough for the hardcore kids but with a solid street sound that the oi! boys would love and enough hooks to catch the punk rockers as well. At the time I was working at Core Tex records and the album blew us all away, so much so that we got in touch with the band and arranged to re-release their debut record World Of Pain. Anyway enough background, this release features alternative versions of two tracks from Working For Nothing which are much rawer than the  versions on the full length just as powerful as the originals that appeared on that ground-breaking record.

Flip over to 7er Jungs and again, we’ve another singer happy to chew on gravel as he spits venom on Sympathy Of Fools. This reminds me in some ways of Razorblade, but with the catchy rock’n’roll elements of a band like, again, Brassknuckle Boys. Their second offering German Angst features higher-pitched vocals but the sound is still firmly rooted in the Oi! Oi! tradition.

Great bands and great songs. What more do you need?  Tom Chapman