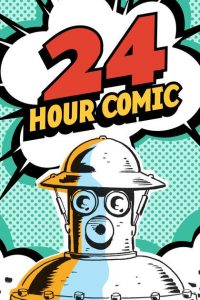 24 Hour Comic is the near impossible “hyper-compressed, speed exercise” invented by the author of Understanding Comics, Scott McCloud twenty seven years ago. The idea behind it is a relatively simple one. To create a complete twenty four page comic from scratch in twenty four hours. And now, for the first time since its inception, director Milan Erceg has documented one of these challenges in all of their donut, coffee, junk food and imagination fuelled glory and it’s a startling, strange and tremendously enjoyable peek behind the curtain at one of the more eccentric, innovative and inspired corners of comicdom. Using the event that took place in Portland’s Things from Another World in 2016, 24 Hour Comic focusses on the eight entrants that participated, their history with the yearly enterprise and how they and others within the Portland comic community see the industry and the concept of the 24 Hour Comic.

It’s a gentle, funny and warm journey through the lives of those involved in the event and offers a unique insight into the participants’ lives, personal interactions, their views on the process of writing, developing and drawing comics within the independent arm of the industry and how, and why, they’re involved in the medium. Like all artistic and literary endeavours, everyone in the film does what they do out of a profound love for the genre, and Milan Erceg has captured not only the spirit and joy of the event, but also the often stark, grim and brutal, but also occasionally incredibly rewarding, reality of what it means to be involved in the ever changing comics business of the digital age. While 24 Hour Comic won’t change the world, won’t turn back time or make humanity more tolerant or caring, it will engender in you a respect and admiration for those who forge away in the underground, and in some cases the mainstream, of the four colour world in order to make something beautiful and unique simply because their heart tells them they have to, and that this is what they’re meant to do, whether they succeed or not. Thoroughly recommended… Tim Cundle

What are you waiting for? Go see 24 Hour Comic here