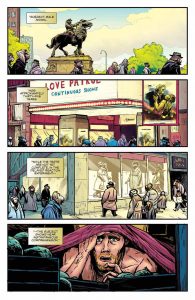 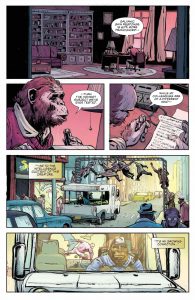 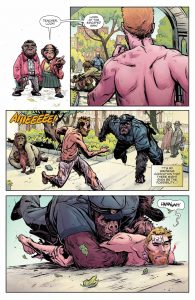 BOOM! Studios searched the 20th Century Fox film archives and unearthed the first screenplay for the original Planet of the Apes (1968) movie, written by Rod Serling, and adapted this radically different vision of the franchise into comic book format for the first time as a part of the 50th anniversary celebration of the film from acclaimed actor/comedian/writer Dana Gould (The Simpsons) and Chad Lewis (Avengers Origins).

The first Planet of The Apes (1968) film is an adaptation of the French novel La Planète des Singes. On the road to making the landmark science-fiction classic, 20th Century Fox commissioned Rod Serling to adapt the source material. However, Serling’s first draft was drastically revised before filming the version of the film that the one the world has come to know and love.

“Fans all over the world have wanted to experience Rod Serling’s original Planet of The Apes and this graphic novel is an incredible realization of that vision,” said Dafna Pleban, Senior Editor, BOOM! Studios. “Dana Gould and Chad Lewis have brought a new dimension to the story you only think you know, delivering a timely, ambitious and unflinching original graphic novel perfect for every reader, whether a long time fan or new to these characters.”

Print copies of PLANET OF THE APES: VISIONARIES will be available for sale in August 2018 at local comic book shops (use comicshoplocator.com to find the nearest one) and book stores. Digital copies can be purchased from content providers, including comiXology, iBooks, Google Play, and the BOOM! Studios app