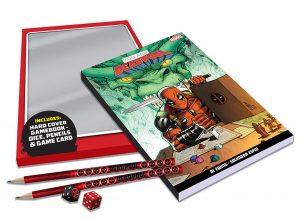 How do you make Deadpool even better than he already is? I have no idea how you’d do it for most folks, but for a life-long Dungeons and Dragons and TSR fanatic like myself, the best way to do it is by throwing in a little RPG (that’s role playing games for those of you not versed in the ways of the icosahedron die) magic; and that’s exactly what Al Ewing has gone and done with You Are Deadpool. It’s been thirty five years, man and boy, since I played my first game of D&D and thirty four since I first ventured into the realm of Fighting Fantasy with Steve Jackson and Ian Livngstone’s The Warlock of Firetop Mountain, a choose your adventure book in which the reader was the hero and through a succession of choices and successful, or unsuccessful, dice roles plotted the course of their own fantastical adventure. And I’m guessing that Al Ewing’s life has followed a similar, but far more lucrative and prosperous, path to my own, as You Are Deadpool is based on the gaming system which Livingstone and Jackson utilised for their books and by doing so, became gaming icons.

Armed with a six sided dice, a character sheet and a myriad of possibilities, it’s up to you, the reader, to guide Deadpool on his time-travelling adventure in which, according to the choices you make, you’ll meet all sorts of Marvel luminaries as you’re whisked through the last five decades of history in a quintet of separate quests that are the delicious ingredients that make up the big chimichanga that is You Are Deadpool . Charting and creating multiple possibilities and outcomes for Wade couldn’t have been an easy task, but it’s one that Ewing seems to have thoroughly enjoyed and I’m sure approached with gusto and delight, as You Are Deadpool  is everything that I hoped it would be and so much more. Bursting with ‘Pool’s trademark deadpan, close to the bone humour and a plethora of geek culture in-jokes, the format of this story actively encourages Wade to shatter the fourth wall at any, and every opportunity and allows Espin and Diaz to get creative with the finely detailed, jaw dropping art that’s packed into every panel and page.  You Are Deadpool is the most fun I’ve ever had in Wade’s company, and that should tell you all you’ll ever need to know about how awesome this book is, because I’ve got a massive, and what some “people” might call unhealthy, man crush on the Merc with a Mouth.

How do you make Deadpool better? You add some dice, Al Ewing, Salvador Espin and Paco Diaz. And then you up the ante and package all of those wonderful things* in a limited edition, all kinds of awesome, boxed set which includes a special Hardcover edition of the book, some pencils and impossibly cool die with Wade’s name and face on them and a character sheet to record the progress, and many hopelessly over-dramatic deaths, of everyone’s favourite crazy, super-powered mercenary, Deadpool.  That’s how you make Deadpool even better than he already is. Nearly as cool as Star Frontiers** and every bit as awesome as The Pillars of Pentegarn*** , this limited edition boxset is everything your inner geek needs to be completely nurtured and fulfilled.  Let the games begin… Tim Cundle

*Look, I know that people aren’t “things”, I’m not a complete Neanderthal. But just go with it okay?

***The BEST Choose Your Own Adventure book that the previously mentioned TSR every published. That’s not just an opinion, it’s a fact. The end.