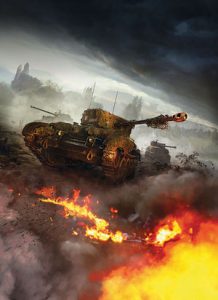 While I am dreadfully unaware of the net based game that World of Tanks is based on, I am more than familiar with, and partial to, old war comics, especially Battle and Commando, which the wonderfully nostalgic, yet incredibly brutal and forthright, Roll Out is descended from.  It’s the story of two tank crews, a rookie British unit and a weary, veteran German gang, heading toward their inevitable collision in the theatre of conflict in the month following the D-Day invasion. Unlike its rather straight forward and all too often direct and rather simplistic (in terms of style and form) ancestors though, Roll Out is built upon layers and layers of complex, carefully and thoughtfully constructed characterisation and the relationships and impenetrable bonds forged between men when faced by the constant threat of death. Ennis’ story isn’t afraid to confront the horrors of war and the reality of being crammed inside a steel shell and forced to fight for your life, and those of the civilians you’ve been sent to liberate, in a situation in which no right minded, free thinking individual should ever find themselves. World of Tanks doesn’t spare its readers sensibilities, capturing the essence and presence of omnipresent fear and dread in its often uncompromising dialogue and doesn’t pause for an instant as the action and destruction flow thick and fast in Ennis’s tragedy of mechanised behemoths locked in their dance of death.

It would have been all too easy for Ennis to paint the players on the opposing sides in black and white, goodies versus baddies, but rather than follow that path, he ensures that all of the protagonists are rounded, full formed and three dimensional, making the reader want to invest their time and energy in, and ultimately come to care about each of, them. And when that final meeting does occur, thanks to the myriad of sub-plots that have woven their way through Roll Out, it’s unexpected and jarring, but ultimately satisfying. Then there’s Ezquerra and Holden’s art, which while completely different in style and texture, the formers giving the story an edge that’s reminiscent of Cross of Iron and The Big Red One and the latter’s more lightweight, detailed approach making it feel more like Kelly’s Heroes, nevertheless propels the tanks and their crews forward to blood soaked, gory glory. And every bombed out, bullet ridden panel and page looks incredible. Climb aboard, baton down the hatches, start your engines and get ready to load the big guns. It’s time to Roll Out. Tally ho! Tim Cundle