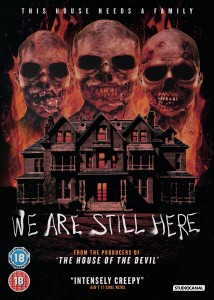 We Are Still Here (Studiocanal)
If you yearn for the rich tone and vibe of Seventies horror – and the Eighties, to an extent – and you’re wondering if anyone else can conjure it as well as Ti West did with ‘The House Of The Devil’ and ‘The Innkeepers’, look no further than this destined-for-cultdom haunted house chiller from Ted Geoghegan, which is heavy on atmosphere and mood and plays everything by the rule book yet somehow manages to put a fresh twist on it all. The story is one you’ve heard a hundred times, with a bereaved couple moving into an old house “with a history” on the edge of town – a town with an awful secret, no less, and soon things are going bump in the night, especially down in the cellar, as an ancient evil lumbers into life, and the couple are forced to call in their best friends, who just happen to be spiritualists. Like I said, this is formulaic stuff, but hey, it’s a great formula so why fuck with it? And Geoghegan certainly knows how to ratchet up the tension, wringing every last scare from the spooky locale, and he doesn’t shy away from the gore when the sharp objects start flying either. Even the [spoiler alert!] undead effects are pretty decent considering this was probably made on the catering budget of most studio films, but that’s the beauty of it; it’s been made by an obvious fan of the genre who knows you don’t need big money shots to scare the living piss out of someone, and he successfully channels the spirit of John Carpenter – think a land-locked ‘The Fog’ and you won’t be far off the mark – into something rather brilliant. Which also has scream queen Barbara ‘Reanimator’ Crampton as one of its leads, so what’s not to like? Ian Glasper