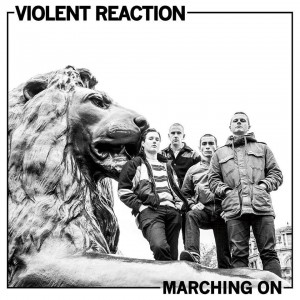 Violent Reaction – Marching On CD (Revelation)
2015 is shaping up to be a hell of a good year for new releases and Violent Reaction’s debut for Revelation records looks set to be a definite contender for album of the year. Brutally fusing early 80s Mid-West Hardcore (Necros/Negative Approach at times vocalist Tom P is uncannily like NA’s John Brannon) with the 80s UK Oi that inspired those Mid-West bands (4 Skins/Blitz), ‘Marching On’ steams into your ears like a Doc Martin to the chops. Exceptionally tight and aggressive, VR have a leanness to their sound – but at the same time better produced and more ‘complete’ sounding than many of those early 80s Hardcore/Oi releases. Check out ‘Disorder’ or the title track (which I initially thought was going to be cover of NA’s ‘Nothing’) for the perfect example of the bands 4 Skins meets NA sound and lyrical disposition. All Hail the NWOBHC. Ian Pickens