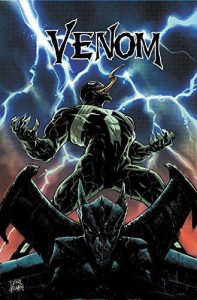 As a child and avid comic book reader in the 80’s, I remember the introduction of Venom vividly and he went on to become one of my all-time favorite Marvel bad guys. He was the yin to Spidey’s yang and the Garth Knight to his Michael Knight. The fact that he was an alien symbiote was very cool to my impressionable mind and just when you think, they can’t possibly do anything more with the dual form monster, Marvel go and put Rex out. Collecting the first six issues of 2018’s new(ish) start for Venom,  Rex is written by Donny Cates, most recently seen tampering with other Marvel characters such as Thanos and Doctor Strange.

We’ve seen in movie and book form-the collapse of S.H.I.E.L.D and its affects, but a bigger challenge is brewing under the streets of New York. Something evil is stirring, both below the streets and perhaps more unsettling in Venom himself. This ancient evil may even be enough drive Venom to cast off everything it cares for-including its human host-Eddie Brock, in an unprecedented battle for the ages.

Once again, Marvel’s current Spiderman “go to guy” Ryan Stegman’s superb illustrations make the action bounce off the pages and the story itself is the best I’ve read in a Venom book for a number of years, with the big bad Rex, making the threat to Venom’s existence very real. In a switch to the norm, you’ll find yourself rooting for one of Marvel’s bad guys for a change, who in Rex, just got a whole lot badder… Chris Andrews