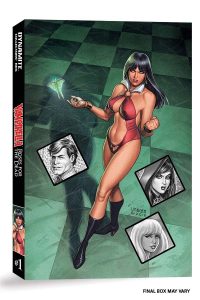 Dynamite Entertainment has announced the launch of their latest Kickstarter campaign, benefiting fans of Kristina Deak-Linsner and Joseph Michael Linsner’s and his recent work on Vampirella, with a limited edition, collectible box set. Joe’s artwork continues to be sought after among fans and Dynamite has heeded their words with a complete collection of his #1 issue!

Following the success of the Vampirella/Dawn crossover event, Vampirella is back with a new, solo series, and Linsner is penciling her from a script written by Kristina Deak-Linsner. To celebrate the series’ upcoming launch, Dynamite is offering all five covers of issue #1, and two exclusive prints (one signed by Linsner), collected inside a high-quality, magnetic-closing box, featuring Linsner’s artwork, inside and out. This box set will have an SRP of $199.99 at retail, but fans can pre-order this box set on Kickstarter between now and June 3rd to get an even better deal with more perks and additional add-ons that will only be available to Kickstarter backers.

“I’ve always been attracted to characters who are “bad for good” meaning that at first they may look like villains, but they are really heroes,” says Joe Michael Linsner.  “Batman is kind of like that.  Vampirella, a genuine vampire, is definitely like that.  She lives by consuming blood, but she has a mission.  She stands up for the innocents of the world and only drinks the blood of the guilty.  Hell, they deserve it.  I’m also thrilled being the artist chosen to illustrate the first series written by my talented wife, Kristina Deak-Linsner.  Over the years, Kristina has told me many of her ideas for stories.  I think it is great that she is finally going to be sharing them with the world.”

When asked about what makes her excited about the project, Kristina Deak-Linsner added, “I wanted to write something that harkens back to the Warren days but with a new twist. I think any reader, whether familiar with Vampirella or not, can dive right into this series and instantly get a feel for what is happening. The setting takes place in Philadelphia (my town) and the historical architecture mixed among a modern landscape has such a great schizophrenic feel. I truly hope everyone enjoys it.”

In addition to Vampirella #1, Kickstarter backers will also be able to pre-order their copy of the 2019 Vampirella poster calendar which features 50 years of historical Vampirella artwork, including a piece by Linsner. This over-sized calendar measures 24.5” X 12” and was designed for art fans who want to appreciate great work in a larger format.

All of these items are extremely limited and may not be available in all comic shops, therefore, fans are encouraged to pledge for their pre-order now, and guarantee delivery, by visiting the Kickstarter campaign which can be found here