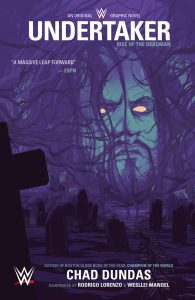 While I’m old enough to remember watching WWE (or as it was known back in those days, WWF) shows before the Undertaker made his debut in a Survivor Series match at the beginning of the nineties, it was only after the Dead Man appeared that I really became a Professional Wrestling “mark”.  He brought something new, fresh and exciting to the ring and made every single match that he was in seem far more dangerous than anything that had gone before. Whether it was his ominous entrance that set the tone for what was to come, his apparent invincibility, his sheer size and terrifying presence, the fact that his finishing move was far more brutal than the closing combinations his competition were using or a combination of all of those factors is open to debate, but whatever “it” was, the Undertaker had, and still has, “it”. So, it was just a matter of time until the American badass’ story was finally told, and in Undertaker: Rise of the Deadman Chad Dundas and his artistic tag-team attempt to do just that.

I say attempt, because it was always going to be a nigh on impossible task to cram one of the most eventful, three decade long careers in wrestling history into one hundred and something pages; there just isn’t the space to go into the kind of great depth that some more obsessive (ahem, me, ahem) fans expect. However, Dundas does a remarkable, and always thoroughly entertaining and incredibly readable, job of telling ‘Takers kayfabe history by ploughing through the highlights, and some of the low points, of his tenure in the WWE. Revolving around his relationship with Paul Bearer and Kane, and the effect that the in character loss of his family had on his drive and determination, Rise of the Deadman is packed with blink-and-you’ll-miss them feuds and alliances,  but ultimately achieves exactly what it set to do. It tells the Deadman’s story in a way that’ll keep even the most feverish and devoted of square circle fans glued to their seats, turning page after fantastic page. Bolstered and buoyed along by the knockout, energetic and stylised  artwork of Lorenzo, Acuna, Manoel and company, Dundas manages to accomplish what I honestly thought couldn’t be done. He creates a complete and enticing canvas that depicts the Undertaker’s life so far and leaves the door open for the next chapter of his unwritten future. Something wicked this way comes… Tim Cundle